Problem: That COUNTIF function is cool. Is there a way to sum all records that match a criterion?

Strategy: There is a SUMIF function that works similar to COUNTIF. In this case, you would look at all values in E8:E63 to see if they are equal to "Accounting". If they are, you want to add up the corresponding value from F8:F63. 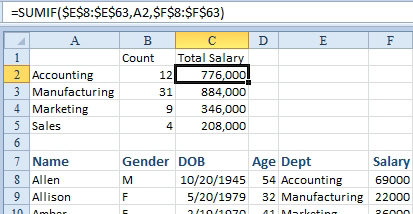