Excel: IF with Two Conditions

Problem: The CFO decided we should only pay the 2% bonus if a second condition is met. The GP% must be 50% or higher in addition to the sale being over $20,000.

Strategy: There are three common solutions to this problem: nesting IF statements, using AND, using boolean formulas. All three will be discussed here.

The most common solution is nesting one IF statement inside of another. The formula would be: =IF(F2>20000,IF(I2>0.5,0.02*F2,0),0). This first checks if the revenue is over $20,000. The second argument holds a formula to use when the logical test is true. In this case, the second argument is another IF statement that checks to see if the GP% is over 50%. 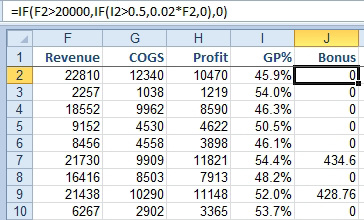