Problem: As shown in the previous topic, adding calculated items causes the totals to be wrong. I want to test grouping offices into territories. How can I do it?

Strategy: In "Build a Better Top 5 Using Groups," you learned how to group text in a pivot table. Building territories works in a similar fashion. Follow these steps: 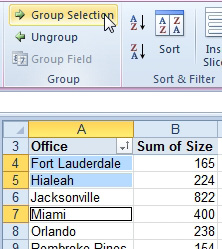