Problem: I like the look of 3-D chart types, but they don't seem to be accurate.

Strategy: 3-D chart types are not accurate, so you should try to avoid them. The 3-D effect usually ends up introducing errors into the chart.

Have you ever taken a photography class? The problem with a wide-angle lens is that anything in the foreground appears unusually large. 3-D pie charts have the same problem. The wedges at the front of the chart get more pixels than the wedges at the back of the chart. For example, both charts below are plotting the same data. This organization is spending 34% of its budget on administration. If you are the scientific review board, trying to argue that the administration slice is too large, rotate it around to the front, as in the bottom chart. In the bottom chart, 155% more pixels appear in the administration slice than in the research slice. 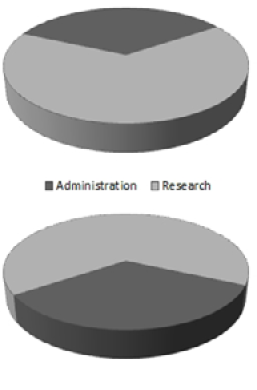